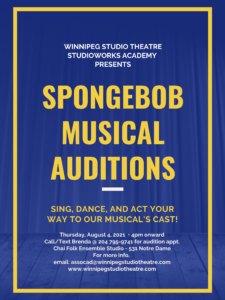 Auditions for the StudioWorks Academy 2022-23 are now open! This year’s production is SpongeBob the Musical which is being presented in MAY ’23. Contact: assocad@winnipegstudiotheatre.com to book an appt.

The StudioWorks Academy program is specifically geared to students who wish to improve their skill level in musical theatre and performance technique There are TWO Divisions: Intermediate and Senior Academy.

Senior Academy Thursday evenings from 6:00-9:00 pm at the Chai Ensemble Studio on Notre Dame Enrolment maximum of 22 students Entry by audition only!
– The teaching team consists of: Brenda Gorlick – Director, Charlotte Thompson – Asst. Director and Rachel Cameron – Music Director.
– The 32 week, 90 hr. + program annual fee is $1500.00 (paid in two instalments) or an early bird rate – $1400.00 (if paid on or before August 31st)

NEW THIS SEASON!! Intermediate Academy
Tuesday evenings from 6-8 pm for students ages 10 and up who have a limited background in “triple threat” technique but have experience in acting, singing and/or dance.
Enrolment maximum of 16 students Entry by audition only!
– The program is led by seasoned instructor, Laura Kolisnyk.
– The 32 week, 65 hr. + program annual fee is $1200.00 (paid in two instalments) or an early bird rate – $1100.00 (if paid on or before August 31st)

Training in both programs consists of vocal work, movement and dance components and script work leading up to a fully produced book musical in late May. Special guest directors and instructors are introduced throughout the season including Winnipeg Studio Theatre’s Artistic Director – Erin McGrath and former alumni who have entered the professional performance world.