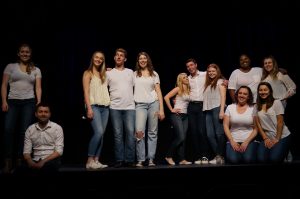 The Adults Only wing of WST’s StudioWorks program wrapped up their 8-month training program with an original cabaret based on relationships. The 90 minute show

loosely based on the trials and tribulations of the “dating game” played to a sellout crowd at the Park Theatre combining song and dance with hilarious vignettes and special guest performers B.O.S.S. Dance crew. Under the direction of Brenda Gorlick with Trish Franklin on piano, the 12 member ensemble showcased classic and contemporary material deftly tied together by “Speed Dating” scenes highlighting many quirky characters. The energy of the evening was palpable and judging by the audience response, an absolute crowd-please.

Watch for the StudioWorks Youth Ensemble’s production of Madagascar which runs from June 6-8th at the Asper Centre for Theatre and Film. Tickets available at: www.winnipegstudiotheatre.com