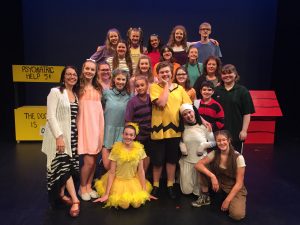 Brenda Gorlick’s YoungStars was launched in 2004 to provide emerging musical theatre artists an outlet for intensive training. It is a two-tiered program combining in-class instruction and production work. The youth ensemble offers year-round classes in triple threat technique for students aged 11-18. In 2011, the program evolved into StudioWorks in conjunction with Winnipeg Studio Theatre offering a Summer Studioworks Intensive and Adults Only Division. The troupe made their theatrical debut at the Winnipeg Fringe Festival in 2004; since then they have performed in DisneyWorld as part of the Magic Music Days program, made several tours to New York City for Broadway training opportunities and been featured at a variety of fundraising galas. Past productions include: Legally Blonde, Urinetown,  Seussical the Musical, Thoroughly Modern Millie, Forbidden Broadway, Edges, Love Notes and most recently You’re a Good Man Charlie Brown.

The program runs Wednesday evenings from 5:45-8:00 pm at the U of W’s Dept. of Theatre and Film. The training consists of vocal work, movement and dance components and script work leading up to a fully produced book musical in late May or early June. Additional rehearsals are incorporated into the schedule prior to production dates. A total of 20 students are accepted into the program annually and gain entry through audition only.

Students participate in the annual Winnipeg Music Festival and Manitoba Dance Festival (additional fees may apply) as well as participate in special events throughout the season, including such events as Culture Days Manitoba, fundraising galas and more…

Special guest directors and instructors are introduced throughout the season; a full-time accompanist works with the company and teaching assistants are present at all classes. Each week a rehearsal schedule is issued to the parents and students which allows the participants an opportunity to experience a professionally based training program.

This program is specifically geared for students who wish to improve their skill level in musical theatre and performance technique. Participants are also encouraged to maintain their personal training in dance and vocal technique outside of StudioWorks.